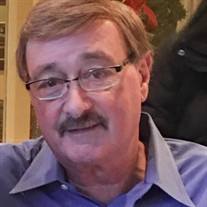 William C. DiFlorio, Jr., affectionately known by his family and friends as Billy, suddenly passed away on December 27, 2021 at his residence. Born on March 4, 1950 to the late William C. DiFlorio Sr and Yolanda (nee: Severio) and has been a life long resident of Philadelphia. He was a recent retiree of the Philadelphia Newspaper Inc. and was both the former Vice President and Secretary Treasurer of Local 1414. His career with the newspapers began with the Philadelphia Evening Bulletin in the late 1960’s and soon became a Foreman after which he moved to the Inquirer and was elected Vice President of Local 1414 and maintained office for more than three decades. He always tried to help those in need and even gave generations of young men and women job opportunities when they needed it most. “For his family and friends, he never said many words but he silently took care of everyone behind the scenes. That was my Bill.” - Nancy DiFlorio Bill has been a Mummer for 59 years, starting in the Comics, then the Fancy Brigades, and finally the string bands to satisfy his love of music. He was a member of Quaker City String Band for nearly 40 years and played the banjo, was a dancer, and a board member. Most importantly, the Quaker City members became an extension of his family. He bled Burgundy and Gray and was very excited for this upcoming year’s Blues Brothers theme. His participation with the band allowed him to travel to many new places. In all that he did, Bill always lived up to Quaker City’s motto: “Class, Pride, Commitment.” He spent weekends during the summer in North Wildwood enjoying the company of family, friends and playing with his faithful dogs, Nikko and then later Boot-z whom he loved. He was a true gentleman who would do anything he could to help anyone in need whether it was at the club or for his family. The love he had for his family will be forever felt by them and held close to their hearts. Bill will also be remembered for his loving, kind hearted, caring, selfless, generous spirit that was devoted and dedicated to his adoring family. Beloved best friend and loving husband of 52 years to Nancy (nee: Lewis). Devoted father of Lisa (Jim) Brigandi and Michele (Frank) Morris. Dearest Pop-Pop to Ryan Morris, Caitlin (Jake) Morris, Maria Morris, Jimmy Brigandi, and Lisandro Brigandi. Brother of Joseph (Terry) DiFlorio, Thomas (Carol) DiFlorio and the late Joyce Rosati and Michael DiFlorio. Sadly, he will also be missed by many nieces, nephews and cousins. Relatives, friends, members of Quaker City String Band and the Mummers Community are invited to his visitation Tuesday morning, January 4, 2022 from 8-10:40 am at the Murphy Ruffenach Brian W Donnelly Funeral Home, 3rd & Wolf Sts. Funeral Mass will be celebrated at 11:00 am at Our Lady of Mt. Carmel Catholic Church. Burial private. Donations in his memory can be made to The Crohn’s and Colitis Foundation, 150 Monument Road Ste 402, Bala Cynwyd, PA 19004

William C. DiFlorio, Jr., affectionately known by his family and friends as Billy, suddenly passed away on December 27, 2021 at his residence. Born on March 4, 1950 to the late William C. DiFlorio Sr and Yolanda (nee: Severio) and has been a... View Obituary & Service Information

The family of William "Billy" DiFlorio Jr created this Life Tributes page to make it easy to share your memories.

Send flowers to the DiFlorio family.