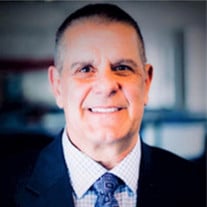 Nicolas A. Golato, Jr., affectionately known by family and friends as “Nic”. peacefully passed away on April 30, 2022 at Good Shepherd Hospice with his family by his side. Born on in Philadelphia on May 4, 1956 to the late Nicolas Sr and Annette (nee: Pedicine) Golato and grew up in Upper Darby, also he attended Wildwood Catholic High School. After completion of high school for three years attended Temple and later transferred to Drexel University to receive a five-year degree in Architecture. Soon he became licensed at began working in his field soon was employed by the Ewing Cole firm and more recently by Cerami and Associates located in Center City. He worked on many projects including the new Citizens Park Stadium as well as the Lankenau Hospital Heart Center and hands of gold with a heart to match. Nic had an incredible intensity when he would review architectural plans and designs. He had many loves in his life including spending time at his summer home in North Wildwood, NJ, boating, attending Broadway Shows and going to movie theaters, selling and appreciating antiques, spending time with his pets and reading technical computer documents. When remembering Nicolas his family said he was witty, funny, caring, dedicated and devoted to them, charismatic, charming, an excellent secret keeper who also enjoyed talking politics. As for friends once he had an opportunity to know you, he would really begin to open up and you could appreciate him. Also, Nic assisted on the Equal Rights Organizations board making sure that everyone was looked upon and treated fairly. Beloved spouse and best friend of 49 years to Raymond T. Butler. Brother of Yvonne (John) Ditoro, Louis (Bettyanne) Golato, Paul (Lori) Golato, Steven Golato and brother-in-law to both Linda (late William) Rescigno and Robin (Salvatore) Gerace. Sadly, Nicolas will also be missed by his many nieces, nephews, great nieces, great nephews, cousins and many extended family members, especially Davis (Tracy) Vogel whom he was a father figure to and by many good life long friends. Relatives, friends, member of AIA and members of Temple Alumni are invited to gather Friday morning from 9:15 to 10:25 at Our Lady of Mt. Carmel Church, 3rd & Wolf Sts. Followed by his Funeral Mass 10:30am. Burial private. In honoring his giving nature, memorial donations in Nicolas’ memory can be made to Fr. James Close c/o Mercy Home for Boys & Girls, 1140 W Jackson Blvd. Chicago, IL 60607.

Nicolas A. Golato, Jr., affectionately known by family and friends as &#8220;Nic&#8221;. peacefully passed away on April 30, 2022 at Good Shepherd Hospice with his family by his side. Born on in Philadelphia on May 4, 1956 to the late Nicolas... View Obituary & Service Information

The family of Nicolas A. Golato, Jr. created this Life Tributes page to make it easy to share your memories.

Nicolas A. Golato, Jr., affectionately known by family and friends...

Send flowers to the Golatoo family.