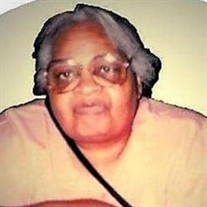 MABEL ELIZABETH HAMMOND Our beloved mother, Mom, Mom-Mom Sister, Aunt, Cousin, and dear Friend was called home to be with Her Lord on November 12, 2021 at home with her family by her side. Mabel Elizabeth Hammond was born in Chesterfield County, Va. on October 17, 1926 to the late Reuben Garfield Holmes and Elizabeth (Lizzy) Carter, her parents moved to Chester, Pa. when Mabel was about two years old. She met and married her first husband George A. Jennings with who she bore six children; Evelyn, Celestine, Evon, George Jr., LaFenus, and Anthony Jennings. Mabel would later marry Jesse L. Hammond with whom she would bear seven more children; Almeda, Jessie, Keith, Wayne, Warren, Donna, and Daryl Hammond. Although Mom, would find occasional work outside the house her life was mostly devoted to raising her children, and ensuring that they always had enough of her wonderful cooking and love to grow strong. She was also known throughout the neighborhood for her amazing ability to turn a can of spam into a gourmet meal. The most joy in her life came from interacting with her children, and especially her grandchildren who all affectionately called her MomMom. Mabel is predeceased by her husband Jesse Hammond; by her brothers Andrew Holmes, Frank Harris, and sisters Hester L. Bentley, Mary Fulton and Patricia Waters; five children, Evon Hunter, George Jennings, Almeda Fitzgerald, Keith Hammond and Jesse Hammond. She is survived by her brothers; LeRoy and John Holmes, and one sister Dorothy Grimes; nine children, Evelyn Binns, Celestine Barnes, Lafenus Jennings, Anthony Jennings, Wayne Hammond, Warren Hammond, Donna Fulton, and Daryl Hammond, approximately 130 grandchildren and approximately 115 great grandchildren. As she was so deeply loved by all who really knew her, she will also be just as profoundly missed. Relatives and friends are invited to her visitation Friday morning from 10-10:45am at the Macedonia Seventh-day Adventist Church, 1917 W. 6th Street, Chester, PA 19013. Funeral Service 11am. Burial will follow in Chester Rural Cemetery.

MABEL ELIZABETH HAMMOND Our beloved mother, Mom, Mom-Mom Sister, Aunt, Cousin, and dear Friend was called home to be with Her Lord on November 12, 2021 at home with her family by her side. Mabel Elizabeth Hammond was born in Chesterfield County,... View Obituary & Service Information

The family of Mabel E Hammond created this Life Tributes page to make it easy to share your memories.

Send flowers to the Hammond family.