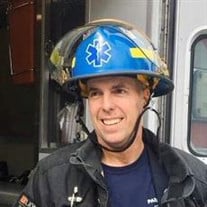 Greg Browne of Ocean City, N.J. and Philadelphia, P.A. passed away on January 1, 2020 at the age of 53, after a courageous battle with cancer. He was a member of The Philadelphia Fire Department. Greg leaves behind his loving wife Amy Brenholts and his devoted dogs Angie and Axis. He was preceded in death by his parents, Robert and Lillian(nee: Rasimas). Greg was born in Philadelphia, PA and was raised in Ocean City, N.J. A devout Catholic, he attended Parochial School: St. Augustine Regional and Holy Spirit High School; where he played football, rowed crew, and was a founding member of the school’s surf team. Greg served as altar boy for St. Francis Cabrini Church as a boy. He attended The University of Miami and later Richard Stockton University. Greg was a member of the Ocean City Beach Patrol where he was a top Patrol competitor in the “surf dash”, running, and rowing. Concurrent with his Beach Patrol duties, Greg acquired his pilot’s license and eventually flew banner planes in South Florida and Southern New Jersey. He later received his multi engine certification and flew shuttles in the Caribbean. Eventually he received his jet rating and flew for Mid-Atlantic Jet and later as a pilot for US Air. Greg pursued many interests in life and was hired as a photographer for local news Channel 40. He eventually moved in front of the camera reporting on the news and weather. Later in life Greg felt a calling to help others and completed Thomas Jefferson University’s Paramedic Course and The Philadelphia Fire Academy graduating as a paramedic. His superb physical fitness and mental determination; enabled him to complete the challenging training. He was stationed at Engine 1, Ladder 5 and assigned to Medic 35. Relatives, Friends and Brothers and Sisters of the Philadelphia Fire Fighters’ & Paramedics Union, Local 22 are invited to his visitation Wednesday Eve from 6-9pm and again on Thursday morning from 10:30-11:45am at St. Patrick Church, 242 S. 20th St. Philadelphia, PA 19103. Followed by his Funeral Mass 12 noon. Burial will be held privately. Memorial donations in his memory can be made to the Local 22 Charitable Trust Memory of Greg Browne 415 N 5th Street Philadelphia, PA 19123.To express online condolences: www.murphyruffenachfuneralhomeinc.com

Greg Browne of Ocean City, N.J. and Philadelphia, P.A. passed away on January 1, 2020 at the age of 53, after a courageous battle with cancer. He was a member of The Philadelphia Fire Department. Greg leaves behind his loving wife Amy Brenholts... View Obituary & Service Information

The family of Gregory R. Browne created this Life Tributes page to make it easy to share your memories.

Send flowers to the Browne family.