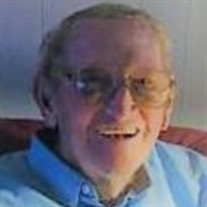 Francis X Hennessy, Sr., affectionately known as “Flash”. Passed away peacefully at home on April 25, 2020 under hospice care with his family by his side. He was born in Philadelphia on July 3, 1928 to Robert and Helen (nee: Stack) and was raised by his sister and brother in law, Cass and Steve Bernhardt in South Philadelphia. Francis was a United States Naval Veteran, Philadelphia Police Officer whom worked in his earlier days in the 12th District and prior to retirement with the Marine Unit and after retiring he owned the Hennessy Variety Store with his wife and son, Michael and wife Lauren. As a teenager he played semi pro football with the Lamont CC football team here in Whitman. Francis was proud of his Irish and Scottish heritage. He enjoyed watching the Phillies play ball, sitting and doing crossword puzzles and sharing his corky witty sense of humor with those around him. He is the beloved husband of the late Marion (nee: Carr). Loving father of Marion (Kevin) Reagan, Francis Jr. (Maureen McCafferty), Michael (Lauren), Edward, Catherine (Denise Centofanti). Proud grand pop to Daniel, Joseph, Andrew, Patrick, Erin, Lindsey, Michael, Nicole, Katie; great grand pop of 10 and great great grandpop of 2. Brother of the late Robert, Helen and Margaret. He will also be sadly missed by his nieces, nephews, cousins and many good friends. A Visitation will be held on Thursday morning beginning at 10am at the Murphy Ruffenach, Brian W. Donnelly Funeral Home, 3rd & Wolf Sts. A private Religious Service will follow at noon as well as burial in SS: Peter & Paul Cemetery. Donations in his memory can be made to either the PA Wounded Warriors, Inc (1117 Country Club Rd. Camp Hill, PA 17011) or the Philadelphia Police Widows Fund (116300 Caroline Rd. Phila., PA 19154)

Francis X Hennessy, Sr., affectionately known as &#8220;Flash&#8221;. Passed away peacefully at home on April 25, 2020 under hospice care with his family by his side. He was born in Philadelphia on July 3, 1928 to Robert and Helen (nee: Stack)... View Obituary & Service Information

The family of Francis "Flash" Hennessy Sr created this Life Tributes page to make it easy to share your memories.

Send flowers to the Hennessy family.