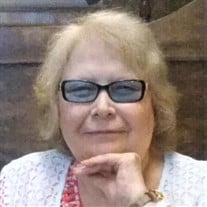 Carole Ann Scott, age 77, passed away January 5, 2020 in Jefferson University Hospital. Loving wife of the late Joseph Patrick Scott; devoted mother of Joseph Patrick Scott III (Erika DiBiase) and Lisa Scott; dear sister of Robert Cole, Geraldine Coalson and the late Jack Cole and Joan Andrews. Carole was a graduate of Interboro High School and resided in Aston. She was full of life and was always making friends everywhere she went. She loved people and would often spark up conversations with others. Carole had a quest for knowledge that was very diverse from learning about other cultures to reading historical mysteries. She was sharp with an inquisitive mind and was an avid reader with her love of books. As a young woman she desired to be an anthropologist and worked at the University of Penn Anthropology Museum as a Mummy duster. In years later would bring her children to the same museum and others, sparking their interest in culture. Before she had a chance to continue her education she fell in love, married and had children. Carole always held a fascination of what the world had to offer. Her family meant everything to her. Her children were her world and she was always there for them. Carole loved nature and animals owning two dogs and cats. She watched the birds and squirrels daily at their feeders delighted to see them every morning. Traveling to other countries was always a dream but never attained. Instead she was enamored by the all the travel shows. The beach was her second home. Anytime she could get to the beach she was available. The sound of the crashing waves and the beauty of the ocean was something she adored and would just sit for hours and watch the ocean. She was kind and generous to a fault, helping many people throughout her life. At one point in her life her brother Jack became quadriplegic and she cared for him four fourteen years until his death. They spent many hours together in friendship and kinship laughing. Carole sacrificed herself for his wellbeing because he was family and he meant so much to her. She had a special relationship with her youngest brother Robert. She loved him and all of her siblings greatly. Her last years were spent laughing and enjoying life with her children, family and friends. Her death came sudden and unexpected. She wanted ten more years or twenty but sadly, it was not to be. She will be greatly felt and missed in so many hearts and is a twinkle in the stars now watching over us all. Funeral Services private. In Carole’s memory donations may be made to the American Heart Association, 1617 John F. Kennedy Blvd. #700, Philadelphia, PA 19103 or the Tri-State Bird Rescue 7 Research, 170 Possum Hollow Road, Newark, DE 19711.

The family of Carole Ann Scott created this Life Tributes page to make it easy to share your memories.

Send flowers to the Scott family.