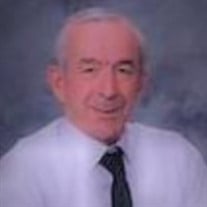 William Charles Arnold, affectionately known as “Bill” to family and friends, passed away peacefully on October 6, 2021. A proud U.S. Naval Veteran who served during the Korean War in the South China Sea Theatre, he received the Korean Service Medal, United Nations Medal, and the China Service Medal. Born on July 22, 1932, to the late Raymond and Eileen (nee: Lippsett) Arnold, Bill was a lifelong resident of Philadelphia. Bill possessed a strong work ethic. After working at Exide Batteries for many years, he and his wife worked together in their business Homespun Decorators. In later years he went to work at Lowe’s in Langhorne, where he was acknowledged as a 15-year employee. Bill was an elected Judge of Elections in N.E. Philadelphia, 6th Division at the 66th Ward. As an avid Philadelphia Eagles and Phillies fan, he was proud to bleed Phillies red and Eagles green. Bill was dedicated to his family, city, and country, was a devout Catholic, and was a traditionalist who loved people. Beloved husband of the late Patricia (nee: Rudden) Arnold. Loving and devoted father of Patricia (Martin Jr, M.D.) Silbiger, and Donna (Gerard McMahon) Mendieta. Proud Pop of Leigh, Joseph (Julia), Lauren (Jacob), Gabriela (Asaf), Samantha (Quddus), John Paul, and great grandfather to Aidan, Amelia, Anne, Liam, and Maddison. Brother of Dorothy O’Malley and the late Lorraine Armstrong and Raymond Arnold. He is also survived by nieces, nephews, cousins, and many good friends. Relatives and friends are invited to his Visitation on Sunday, October 17, 2021, from 6-8 PM and again on Monday, October 18, 2021, from 8:30-9:45 AM in the Burns Funeral Home, 9708 Frankford Ave., Philadelphia, PA 19114. Funeral Mass to follow at 10:30 AM in St. Anselm Church, 12670 Dunks Ferry Road, Philadelphia, PA 19154. Burial at Resurrection Cemetery.

William Charles Arnold, affectionately known as &#8220;Bill&#8221; to family and friends, passed away peacefully on October 6, 2021. A proud U.S. Naval Veteran who served during the Korean War in the South China Sea Theatre, he received the... View Obituary & Service Information

The family of William "Bill" Arnold created this Life Tributes page to make it easy to share your memories.

Send flowers to the Arnold family.