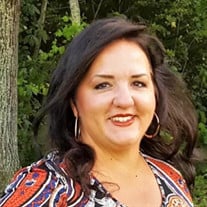 Stephanie Patricia Simmons, affectionately known as “Steckie” passed away peacefully on the beautiful spring morning of April 13, 2022 at Cooper University Hospital. She was surrounded in love, near and far. The following words are too few to describe her, what she gave and meant to so many. Stephanie was small but mighty, and it never showed more than during her courageous battle with metastatic colon cancer. Born on March 2, 1970 to the late Patricia (nee: Mietla) and Robert Gosciak, she spent her early childhood in Gloucester City, NJ. Her teen years were spent in Cherry Hill being raised by her step mother Jean (nee: Jeffers-Ross) Thomas with her siblings through marriage, Phil, Debbie, Danny and Diana. As a proud graduate of the Cherry Hill West “Class of 1988,” Stephanie went on to study and receive her Bachelor of Arts in Radio, Television and Film from Temple University in 1992. Stephanie’s professional career started at BSA Advertising as an account coordinator. She moved on to work for The Bernard Hodes Group in multiple roles of senior account coordinator, account executive and account supervisor; spanning 17 years and making lifelong connections. Stephanie finished out her career at Community Realty Management working as a Marketing Specialist at The Greens apartment complex. She was well respected and loved by her residents. Stephanie could be found cheering on the sidelines at her children’s soccer games, which is the place she loved to be the most. If she wasn’t at a soccer game, she was running a Girl Scout cookie stand, taking a nap, at a school event volunteering, celebrating and advocating for all of her Winslow kids or having breakfast with her girls. She was the co-founder of the Proud Parents of Winslow group. In addition, Stephanie appreciated a good movie or television show that made her ugly cry and had a lifelong love of Disney and Billy Joel. Beloved wife of Ken Simmons, they were married four months shy of 25 years. Her greatest role and accomplishment was being the dearest mother of Matthew “Matty” and Sarah. She was a fur mom to Goober, and previously to Maverick and Oliver. Stephanie was predeceased by her loving parents, grandmother “Grannie” Alma Ross, Aunt Barb and her nephew, Jason Reeves. In addition to her husband and children, she is survived by her cousins Cathy (Bob) Reeves, Julie (Patrick) Kane and Gregory (Chris) Gosciak and her godchildren, Harrison Kane and Jace Gillis. She is also survived by nieces, nephews and many dear extended family and friends that were family to her. Relatives, friends, members of PPOW, Winslow Twp. School Staff and HSA are invited to attend a “Celebration of Life” on May 22 at the Gloucester Township Democratic Club, 131 Coles Road, Blackwood, NJ, 08012 from 1pm to 5pm. In lieu of flowers, it is the family’s wishes for memorial contributions to be made to The MD Anderson Cancer Center. All donations made in Stephanie’s name will be used to support the following initiative: Patient in Need Fund. Donations can be made in C/O The Cooper Foundation, 101 Haddon Avenue, Suite 302, Camden, NJ 08103 or online at http://support.foundation.cooperhealth.org/donate Donors should indicate the fund and that the donation is being made in memory of Stephanie Simmons. Checks can be made payable to The Cooper Foundation.

Stephanie Patricia Simmons, affectionately known as &#8220;Steckie&#8221; passed away peacefully on the beautiful spring morning of April 13, 2022 at Cooper University Hospital. She was surrounded in love, near and far. The following words... View Obituary & Service Information

The family of Stephanie "Steckie" Simmons created this Life Tributes page to make it easy to share your memories.

Send flowers to the Simmons family.