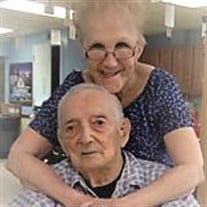 Barbuto Salvatore, Jr. “Sam” Passed away peacefully on April 27,2020 at Gardens at Orangeville Nursing Facility. He is a proud United States Air Force Veteran who served in the Pacific and European Theaters as well as active duty in the Korean War. Born in South Philadelphia to Salvatore Sr. and Anna (nee: Salsetta) Barbuto and was raised here also. In his earlier years fixing and building things was his interest. Upon completion of his schooling he decided to enlist in the military. Sal served for 20 years with the department of the Air Force and then served an additional 10 years in the civil services department at McGuire Air Force Base. He served as a navigator and a mechanic for the military and was a well decorated airman who was credited with inventing and fabricating a safety mechanism for planes cock pits that was referred to as the “Protector cover over crew LOX pressure gauge on the C-141 jets and planes. He will be remembered as a talented and caring husband, father and uncle who was always there to help anyone in need. He enjoyed once again fixing and building things. His family would call upon him for all types of projects. He even built an addition of two bedrooms on his mobile home. Some of his most enjoyable time he spent was in Millville, PA with his wife at their mountain home. He always managed to keep himself busy. Salvatore is the beloved husband of 70 years to Antoinesca (nee: Ciccone) Barbuto. Loving father of Salvatore (Elaine) Barbuto III. Dearest brother of Charles Barbuto and the late Grace Porco, Victoria Porco, Anthony Barbuto, Joseph Barbuto, Philomena Britton, Bruno Barbuto and Pete Barbuto. He will also be sadly missed by his nieces, nephews, cousins and his extended family Fred and Maria Foster. A Visitation will be held Saturday morning from 10-11am at the Church of the Epiphany, 11th & Jackson Sts. A PRIVATE funeral Mass will follow with burial in Wenonah Cemetery. Donations in his memory can be made to St. Jude Children’s Hospital, 262 Danny Thomas Place, Memphis, TN 38105 or visit their website.

Barbuto Salvatore, Jr. &#8220;Sam&#8221; Passed away peacefully on April 27,2020 at Gardens at Orangeville Nursing Facility. He is a proud United States Air Force Veteran who served in the Pacific and European Theaters as well as active duty... View Obituary & Service Information

The family of Salvatore "Sam" Barbuto Jr. created this Life Tributes page to make it easy to share your memories.

Send flowers to the Barbuto family.