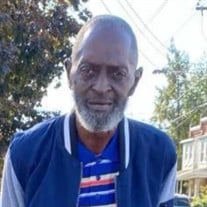 Robert Wesley Tucker aka Poppy aka Smurf February 20, 1957 – July 19, 2021 Robert, who is better known as Poppy or Smurf, was a very private and proud man. Despite his long battle with congenital health issues, he stayed very active. Poppy often hung-out with his close group of friends, especially Roc G’s, doing things such as fishing, shopping in NY, and reminiscing about old times. Poppy was also known to be a debonair dresser, wearing a matching baseball cap and the latest sneaker on a casual day, but would also polish his look with custom suits, fancy hats, and designer shoes if the occasion called for it. Smurf was often a man of few words yet had strong opinions and a witty sense of humor, he will be truly missed. Robert is preceded in death by his parents, Anna Mae and Robert Tucker, sister Linda Tucker and his spouse of many years, Linda Day. He leaves his children Lynesha, Robert, and Arron to cherish his memory. Lynesha had a very special relationship with her father, she inherited his personality and dedicated herself to caring for her father full-time, which often included traveling to other cities to insure he had the best healthcare. Poppy was the only male child and had the responsibility of looking after his sisters, which includes: Vennessa Barton (Richard), Valarie “Mommy”, Brenda, Lorraine “P-Nut”, & Elzena “Dean” Tucker. In addition, he has three granddaughters (Kamiyah, Kanayah, & Kylee), a significant other Gina Cooper, a special nephew James Tucker, and a host of other relatives. “When someone you love becomes a memory, the memory becomes a treasure.” Funeral Services will be held on Friday, July 23, 2021 at 12 Noon in Integrity Christian Center, 318 Central Avenue, Chester, PA 19013. Burial private.

Robert Wesley Tucker aka Poppy aka Smurf February 20, 1957 &#8211; July 19, 2021 Robert, who is better known as Poppy or Smurf, was a very private and proud man. Despite his long battle with congenital health issues, he stayed very active.... View Obituary & Service Information

The family of Robert W. Tucker Jr. created this Life Tributes page to make it easy to share your memories.

Send flowers to the Tucker family.