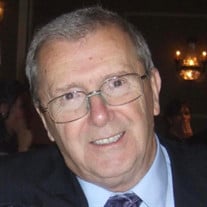 Richard J. Nicholls, Jr., of Leroy, PA, peacefully passed away on November 18, 2021 at the Hospital of Our Lady of Lourdes in Camden, New Jersey. Born on July 11, 1939 to the late Richard and Rita M. (nee: Gormley) Nicholls, Sr. in Woodbury, New Jersey. Rich was a proud United States Marine Corps Veteran who served from 1958-1961 as a radio operator. Also, he was a retiree of Boeing where he worked as a cost estimator in the Vertical Take-off and Landing (Helicopter) division. After retirement his passion moved toward antique gun restoration. After an apprenticeship he became a licensed gun smith and enjoyed building, repairing, and customizing muzzleloader guns for customers all over the country. Several of the guns he worked on have been placed in area museums including the newly opened Revolutionary Museum in Philadelphia. He was an enthusiastic genealogist for his family, loved going hunting, living in the mountains, and spending time with his family. Richard will be remembered as a wise, soft-spoken, fun loving, humble, patient, gentleman who adored his wife and family and was admired by all. He is the beloved husband of 63 years to Jean (nee: Clemmer) Nicholls. Loving father to Richard (Eseta) Nicholls, Scott (Beth) Nicholls, Dr. Brian (Victoria) Nicholls, Barbara (James) Lamaina, Judith Lynn Nicholls and the late James (Lisa) Nicholls. Proud and doting grandfather to 20 grandchildren, 19 great grandchildren and 1 great great grandchild. Brother to the late Jean M. Buntz and Catherine M. DeLara. Also, he is survived by his uncle, Robert Nicholls and cousins Joan Gallagher and Nancy Flemming. Relatives and friends are invited to his visitation on Monday, November 22, 2021 from 10-11am at The Church of Jesus Christ of Latter- Day Saints, 609 Tabernacle Road Medford, NJ 08055. Funeral Services will follow 11am. Burial private.

Richard J. Nicholls, Jr., of Leroy, PA, peacefully passed away on November 18, 2021 at the Hospital of Our Lady of Lourdes in Camden, New Jersey. Born on July 11, 1939 to the late Richard and Rita M. (nee: Gormley) Nicholls, Sr. in Woodbury,... View Obituary & Service Information

The family of Richard Joseph Nicholls Jr. created this Life Tributes page to make it easy to share your memories.

Send flowers to the Nicholls family.