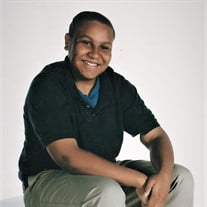 Richard A. Edwards, Jr., the son of Richard A Edwards Sr. and Regina (Nixon) Walter, was born November 25, 1992 in Philadelphia, PA. Richard was affectionately known to his family and friends as “Little Rich” and also “The Mayor of Penarth”. Richard was educated in the Upper Darby School System. Richard loved school, and had perfect attendance throughout his school years. He played on the Drexel Hill Middle School Football Team. While in high school, Richard also trained at the Delaware County Technical High School in the field of Culinary Arts and Hospitality. He graduated from Upper Darby High School, Class of 2011. Richard attended Bibleway Baptist Church where he accepted Jesus as his Lord and Savior at a young age, under the leadership of Dr. Damone Jones. Richard devoted a lot of his time to helping others, whether it was a neighbor, at a local shelter, or volunteering for Catholic Services. Richard brought joy and laughter to everyone he encountered, he was a gentle spirit who loved and just wanted to be loved in return. Richard was a loyal and trustworthy person, who was known for his big smile and love of people. Richard loved to spend time with his family and friends, and always had a question to ask. Richard spent many days helping his father garden, helping his mother with groceries, and just lending a helping hand to everyone he encountered. On April 9, 2021, God called Richard home back into his loving embrace. Richard will always be remembered as a caring, loving, and funny person with a heart of gold, who loved good food and all people. Richard leaves to cherish his memory his Father, Richard Edwards Sr.; his Mother, Regina Walter; 2 Sisters, Nicole Rhodes and Richelle Edwards; 3 Brothers, Michael Rhodes, Bryan Rhodes, and Danny Whidbee; Step Mother, Mattie Thomas; Step Brother, Matthew Williams; 3 Aunts, Jacquelynne Lloyd, Karen Glover, and Janean Bradford; 2 Uncles, Michael Edwards and Frank Edwards; 1 Great Aunt, Jacqueline (Raymond) Tillman; 1 Great Uncle, Ronald (Dottie) Miller; and a host of nieces, nephews, cousins, neighbors and friends. Relatives and friends are invited to gather Saturday, April 24, 2021 from 12-1pm at Household of Faith Deliverance Worship Center, 130 E. Athens Avenue Ardmore, PA 19003. Homegoing Services will follow at 1pm. Burial private. In memory of Richard’s gentle and giving spirit, we ask that donations be made in his memory, to a local Animal Shelter of your choosing. Funeral Services will be live streamed through the Church’s website https://hfdwc.org/ .

The family of Richard A. Edwards Jr. created this Life Tributes page to make it easy to share your memories.

Richard A. Edwards, Jr., the son of Richard A Edwards Sr. and...

Send flowers to the Edwards family.