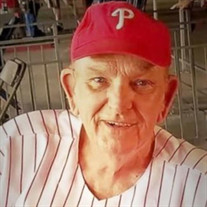 Raymond A. Lewandowski, Jr., suddenly and peacefully passed away on January 8, 2022 at Cape Regional Medical Center. Born on December 20, 1939 to the late Raymond Sr. and Anna (nee: Nelson) Lewandowski and was raised in South Philadelphia. For many years worked for the International Longshoremen’s Association, Local 1242 as a checker. For the past 30 years he enjoyed living at the Jersey Shore. He enjoyed bowling on leagues at both St. Stanislaus in Philadelphia and down the shore in local leagues. He truly loved the holidays and decorating his house, there was no spot undecorated and his South Philly home and won an award from Mayor Ed Rendell and after he moved to the shore, he also decorated his mobile home. He was a Mummer whom marched with the Shooting Stars and Satin Slipper Fancy Brigades and also belonged to the Knights of Columbus Chapter, Our Lady of Angels Parish in Cape May Court House. His summers were spent fishing and crabbing with his grandchildren and enjoying trips to the casino, playing cards, especially Black Jack, when he was supposed to be on the boat! He was a caring, witty, funny, helpful, loving and dedicated family man would do anything for them. Beloved husband of 60 years to his childhood sweetheart Margaret (nee: Casper). Loving father of Kim (French) Lewandowski, Kristin (Montella) Lewandowski and Margaret (Fran) Wozniak. Dearest Poppy of Megan (Jim) Wozniak, Rachel (Jose) Peixoto, Melissa Wozniak, Fran Wozniak, Jr., Erin Montella and the late James “Frenchie” French, Jr. Great Grandpop of Grace, Drew, and Riley James. Brother of Ann Marie McMullen, Robert (Lorraine) Lewandowski and the late Joseph, Charles and Anthony “Tony” Lewandowski. He will be sadly missed by many nieces, nephews, cousins, dear friends and his furbabies Trixie and Frenchie. Relatives, friends and members of PMTA and ILA are invited to his Visitation Thursday morning from 8-10:30 AM at the Murphy Ruffenach, Brian W. Donnelly Funeral Home (3rd & Wolf Streets). His funeral mass will be celebrated 11 AM in Our Lady of Mt. Carmel Church. Burial SS: Peter & Paul Cemetery. In his memory donations may be made to the Katie Kirlin Fund, 229 Wolf Street, Phila., PA 19148 or the Mummer’s Museum 1100 S. 2nd Street, Phila., PA 19147.

Raymond A. Lewandowski, Jr., suddenly and peacefully passed away on January 8, 2022 at Cape Regional Medical Center. Born on December 20, 1939 to the late Raymond Sr. and Anna (nee: Nelson) Lewandowski and was raised in South Philadelphia. For... View Obituary & Service Information

The family of Raymond A Lewandowski Jr created this Life Tributes page to make it easy to share your memories.

Raymond A. Lewandowski, Jr., suddenly and peacefully passed away...

Send flowers to the Lewandowski family.