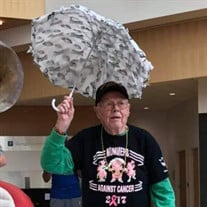 “Parade Pop” formally known as Edward W. Rodgers, age 96, peacefully passed away on January 23,2022 at Thomas Jefferson Hospital. He is now reunited with his beloved wife, Joan, their loving daughter, Deborah and his faithful companion, Rex. He was born on July 7, 1925 to the late William E. and Ida (nee: Swanson) Rodgers and was raised in South Philadelphia. He lived in Wilmington, Delaware. After his wife’s passing, he returned home to his 2 Street roots in South Philadelphia. Pop was a proud United States World War II Naval Veteran who served in the Pacific Theater aboard an Aircraft Carrier. He was a former employee of ACME where he was teamster forklift operator for many years. Years after his retirement Pop would make family members bow their heads whenever he spotted an ACME truck on the road. His favorite motto was, “You cannot spell ACME without ME!” Parade Pop loved living life to the fullest. He enjoyed being around people and he was always looking for the next party or parade! Hence, he got the nickname Parade Pop. He made friends everywhere he went. He loved to dance, and you could always find him dancing with the Mummers as they marched down 2 Street. Growing up he was in a Fancy Brigade with his neighbors from the 100 block of Manton Street. He always bragged about the time his group won first prize. People would ask, “What year was that?’ and he would proudly say 1930! Parade Pop was a very loyal EAGLES fan. He was always in his recliner with his Pepsi in hand watching the EAGLES every Sunday afternoon. Even when they were losing, he remained very loyal to them. In 2018, when the EAGLES finally won the Super Bowl, we all just cried tears of joy. We were thrilled at 93 years of age he had lived to see the EAGLES win the Super Bowl. Following the game, Pop was soon in front of City Hall strutting with his golden slippers and his Mummers umbrella waving high. It was like he was celebrating Christmas, New Years, his Birthday and the big win all at once. To say he was thrilled and excited is a gross understatement. Parade Pop was a local celebrity. He greeted everyone with a smile. He was happiest when he was dancing! Everyone enjoyed his never-ending energy and they would try to keep up with him as he danced the night away. Even his grandchildren couldn’t keep up with him on the dance floor. They tired out long before Pop. Parade Pop loved to tell jokes. He would laugh till he cried when he would tell us his jokes. We would always refer to his jokes as “Pop jokes” since they often made sense to only a few. He was the beloved husband of 61 years to the late Joan (nee: Bowles). Pop was the “Best Girl Dad” to Joan (Len) Dine, Patricia Parkhill, Karen Rodgers, Susan Dolphin (who he embraced as a daughter) and the late Deborah Rodgers. He had a very special bond with his granddaughter, Kimberly, who lovingly cared for her grandfather. He was the brother of the late Lorraine Copenhagen. Pop leaves behind 10 grandchildren and 20.5 great grandchildren to celebrate his memory. He is also survived by nieces, nephews, cousins and many good friends. Relatives, friends and members of the Philadelphia Mummers Association are invited to come and celebrate “Parade Pop’s” life on Thursday eve from 5-8pm at the Chapel of Four Chaplains, 1201 Constitution Ave., The Navy Yard, Bldg. 649,. Philadelphia., PA 19112, After his visitation, we will have a traditional Mummers Farewell at the Chapel. ALL are invited to bring instruments and join in on Thursday evening and again on Friday morning. Another visitation will be held, Friday morning from 9:15-10am, after which his Funeral Mass will be celebrated 10am. His funeral procession will travel past the Mummers Museum approximately 11:30am and parade through the 2 Street Neighborhood before heading to All-Saints Cemetery in Wilmington, Delaware where Pop will be laid to rest alongside his beloved wife, Joan and their loving daughter, Deborah. In lieu of flowers, contributions can be made in Pop’s honor to the Mummers Museum (www.mummersmuseum.com) 1100 S. 2nd St, Philadelphia, PA 19147 or the Chapel of the Four Chaplains (www.fourchaplains.org) 1201 Constitution Ave., The Navy Yard, Bldg. 649, Philadelphia, PA, 19112.

The family of "Parade Pop" Edward W Rodgers created this Life Tributes page to make it easy to share your memories.