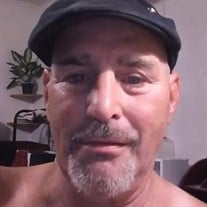 Michael D. Draper “Moe”, suddenly passed away on May 16, 2022. Born in Camden, NJ and raised in Gloucester City. Mike worked as a Master Carpenter in family-owned Draper and Son’s Concrete and Remodeling. Michael was a great dad and lived for his children, he enjoyed watching his children play sports, from football to cheerleading. He was very talented; he had hands of gold and was well known in Gloucester City. Beloved father of Michael Draper, Dominic Draper, David Draper, Thelena Draper, his step son Steven Corsello and the late Salvatore Draper, adopted mother “mother-in-law” Helena Burger. He was Pop Pop to Jordan, Michael Jr., Armani, Natalie, Steven Jr. and Savanna. Brother of Denise, Frank, Dena and Joey “Bonzy”. He is preceded in death by his mother, Geraldine Stevens and brother, Stevens. He is also survived by nieces Kayla, Makia, Koria,Cassie and late Moria and extended family. Relatives and friends are invited to his Viewing on Saturday, June 4, 2022 from 9am-12pm at the Murphy Ruffenach, Brian W. Donnelly Funeral Home, 523-25 Cumberland Street, Gloucester City, NJ 08030. The family is asking that memorial donations be made to the funeral home (please call 856-456-1316) to assist with final expenses since his passing was unexpected. https://gofund.me/dfbf9ff5

Michael D. Draper &#8220;Moe&#8221;, suddenly passed away on May 16, 2022. Born in Camden, NJ and raised in Gloucester City. Mike worked as a Master Carpenter in family-owned Draper and Son&#8217;s Concrete and Remodeling. Michael was a great... View Obituary & Service Information

The family of Michael "Moe" Draper created this Life Tributes page to make it easy to share your memories.

Send flowers to the Draper family.