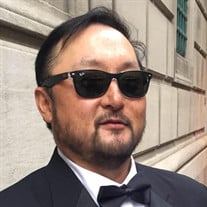 Kevin Francis Lally of Philadelphia, Pennsylvania, passed away on Wednesday, February 17, 2021, at the age of 46. He suffered a sudden heart attack outside of his home and could not be resuscitated despite the efforts of emergency responders. Born November 24, 1974, Kevin was the son of Regina Lally and Francis Lally. He was the beloved partner and fiancé of Jessica Noon, to whom he was engaged to be married. Kevin is also survived by his sisters Karen Lally and Stephanie Jackson, and his beloved niece, Chloe Young. Kevin was born in Seoul, South Korea, was adopted by Francis and Regina Lally from an orphanage at the age of six months and spent the rest of his childhood years in Audubon, Pennsylvania. Kevin’s parents describe him as a happy, gregarious child who brought a smile to the face of everyone he met. Kevin excelled in both athletics and academics from a young age. He began swimming competitively at age six and often competed with children above his age group. Kevin was awarded a scholarship to the prestigious Malvern Preparatory School where he was a triple varsity athlete in competitive swimming, soccer and lacrosse, the president of the National Honor Society and a Junior Olympian. Kevin attended the University of Pennsylvania where he pledged Pi Lambda Phi, a community that would provide him with a lifelong brotherhood of dear friends. He later transferred to Cabrini College where he completed his bachelor’s degree in Communications. Kevin put his natural talent in communications and his competitive drive to work as a sales representative for Thomasville Cabinets, where he thrived for the past 12 years. Kevin traveled throughout Pennsylvania, New Jersey and Delaware to represent his product in dozens of stores, and developed many close friendships. Kevin is fondly remembered by both the staff in his agency and his large professional network not just as a colleague but as a cherished friend. Kevin had a broad social network from his childhood days, his college fraternity, and his Philadelphia community. Kevin made friends quickly and loved to share his passions with others. He was a skilled golfer, a talented home chef, and an aficionado of music of all kinds. Kevin loved sharing food and drinks and cooking meals for friends, whether it was grilled meats, seafood, potato products of all kinds or even casseroles. He was a lifelong fan of the Grateful Dead and attended 99(!) of their concerts, traveling across the country and making many friends along the way. Kevin was a connoisseur of sound and sound equipment, and was known for his large and diverse collection of vinyl records which he loved to play for others. Kevin delighted in sharing his love for music, and rarely missed an opportunity to attend a live concert or host a listening session. Kevin spent his final years with the love of his life, Jess, to whom he was engaged to be married. In Jess, Kevin finally found his match - a fan of the Grateful Dead and Phish who shared Kevin’s love of live music, socializing, cooking, eating and even swimming. Kevin and Jess also shared a sweet goofy pitbull, Seuss, who adored Kevin. Together, Kevin and Jess had a happy home life full of great music, tasty foods and doggie snuggles. They also enjoyed going out with friends and exploring restaurants, parks and music venues in Philly. During the summer, they often spent time at Jessica’s family home in Harveys Lake, swimming and lounging by day and grilling by night, with as many friends as they could convince to join them. In 2019, they bought their dream home, which they tirelessly renovated, and in which Kevin was able to showcase his talents in carpentry and kitchen design. Kevin was a romantic at heart and beamed with pride when he told his friends and family about meeting Jess, and later about their joy in building a life together. Despite the fact that they did not meet until later in life, Kevin and Jess felt immensely grateful for the love they discovered and the years they spent together. Kevin Lally is remembered by his friends, family and professional acquaintances as being incredibly kind, generous and fun-loving. His quick wit endeared him to friends new and old, and he was always available to do a favor or lend an ear for his loved ones. Stories abound of Kevin showing up when a friend or acquaintance had car trouble, needed help moving large objects or asked for donations to a special cause. Kevin loved being there for others, and he never expected or allowed anyone to repay him. Kevin was brilliant, funny, passionate, and caring. His love was constant and unwavering. For everyone who knew him, the idea of Kevin not being here, with us, is the most un-Kevin thought imaginable. In his time here with us, Kevin often expressed that he wanted to leave this world a better place and leave the people he knew happier for having known him. In that, it is clear that he succeeded to an unimaginable degree. And for that, he will always be remembered dearly. A memorial for Kevin’s life will be held in the warmer months, and it will be a sweet, momentous celebration of all things Kevin. In lieu of flowers, please consider making a donation in Kevin’s name to one of the following organizations: The Waterwheel Foundation is the charitable arm of Phish, one of Kevin’s favorite bands. Phish concerts brought Kevin great joy, and the band shares Kevin’s personal values in their charity causes. https://phish.com/waterwheel/ First Tee is a youth development organization whose mission is to make the game of golf accessible to kids and teens of all backgrounds, a cause that was very near and dear to Kevin’s heart. https://firsttee.org/donate/ South Kensington Community Partners is a community-based non-profit organization in Philadelphia for which Jessica (and occasionally Kevin) volunteered their time, whose mission includes green space stewardship, community development and assistance of low-income residents. www.southkensingtoncommunity.org /contribute

Kevin Francis Lally of Philadelphia, Pennsylvania, passed away on Wednesday, February 17, 2021, at the age of 46. He suffered a sudden heart attack outside of his home and could not be resuscitated despite the efforts of emergency responders. Born... View Obituary & Service Information

The family of Kevin Francis Lally created this Life Tributes page to make it easy to share your memories.

Send flowers to the Lally family.