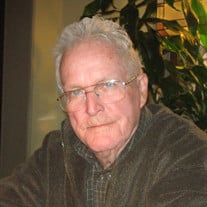 Kenneth C. Panciera “Ken” passed away peacefully on March 21, 2022 at home with his loving family by his side. Born in Manchester Connecticut to the late Ernest and Clara (nee: Cini) Panciera, he has been a resident of Center City, Philadelphia since 1957. He attended two years at Ithaca College majoring in music, and then joined the U.S. Army, serving in Korea in the Army Band. After his tour of duty, he went to the Philadelphia University of the Arts and graduated with a Bachelor of Arts degree majoring in Graphic Design. From there he met and married the love of his life Mary. He worked in 6 agencies before he started his own independent business in 1979 until 2001. He retired at the age of 76. Ken was an artist, illustrator and graphic designer. He played the trombone and guitar, loved camping and traveling, but most of all, he loved painting. At one point, he was chosen by his NY peers as Most Outstanding Graphic Designer of the Year in Philadelphia. His work often appeared in The Art Directors Annual. A book that is published annually highlighting the best works of graphic designers. Ken was a quiet man, kind and hard working. He was a great father who loved his children and grandson. Beloved husband, and best friend of 60 years to Mary (nee: Naletko). Loving father of Drew Panciera, Richard and Marlies Panciera and Adriane and Tom Camp. Dearest “Opa” to Jordi Panciera. Brother of Eleanor Hohenthal and the late Robert Panciera. Brother-in-law of Norman Hohenthal. He will be sadly missed by nieces, nephews and dear friends. Relatives and friends are invited his Funeral Home Service on Sunday, March 27, 2022, 11 AM at the Murphy Ruffenach, Brian W. Donnelly Funeral Home, 2239 S. 3rd Street, Philadelphia, PA 19148. Cremation to follow privately. In lieu of flowers, charitable donations may be made in his memory to the Alzheimer's Association Delaware Valley Chapter, 399 Market Street #250, Philadelphia, PA 19106 or St. Jude Children's Research Hospital, 501 St. Jude Place, Memphis, TN 38105 or PA Wounded Warriors, Inc., 1117 Country Club Road, Camp Hill, PA 17011.

Kenneth C. Panciera &#8220;Ken&#8221; passed away peacefully on March 21, 2022 at home with his loving family by his side. Born in Manchester Connecticut to the late Ernest and Clara (nee: Cini) Panciera, he has been a resident of Center City,... View Obituary & Service Information

The family of Kenneth C. Panciera created this Life Tributes page to make it easy to share your memories.

Send flowers to the Panciera family.