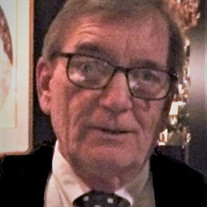 Joseph Francis Toland, Jr, 66, of Philadelphia, PA, peacefully passed away on Saturday, March 19th, 2022, at his home, surrounded by family and friends, after a long struggle with cancer. Joseph was born on January 4th, 1956, to Teresa Florence White and Joseph Francis Toland, in Philadelphia, Pennsylvania. He is predeceased by his father Joseph F. Toland, mother Teresa Klein (nee White), stepfather Peter Klein, sister Joanne Tobin (nee Toland), and son-in-law Louis Agro. He is survived by his children, Regina Agro (nee Toland) and James Toland, his grandchildren Sophia Agro and Jami Toland, and a large loving and supportive group of family and friends, specifically the Burke and Marker families. He had several decades-long careers, including Roofers Local 30 Union, Philadelphia Housing Authority, and the Philadelphia Municipal Court. Joseph was a proud and longtime resident of South Philadelphia, a dedicated and loyal member of the Philadelphia Mummers Golden Crown Brigade. He cherished his time and service to the Mummers organization. He was previously named Man of the Year and is registered in the Hall of Fame. Most recently, he received the Lifetime Achievement Award. He truly enjoyed hosting holiday parties and events at his home. His door was always open to friends, family, and new faces. Most of all, we will fondly remember him for his commitment and willingness to help others. Services will begin with visitation at 9:00 AM on Wednesday, May 4th, 2022, at Our Lady of Mount Carmel Catholic Church 2319 South Third Street, Philadelphia, Pennsylvania 19148, followed by a Catholic Mass beginning at 10:00 AM. In lieu of flowers, charitable donations may be made in his memory to the University of Pennsylvania, Penn Medicine’s The Fund for the Abramson Cancer Center online https://giving.apps.upenn.edu/fund?program=MC&fund=600499 or by calling (215) 898-0578.

Joseph Francis Toland, Jr, 66, of Philadelphia, PA, peacefully passed away on Saturday, March 19th, 2022, at his home, surrounded by family and friends, after a long struggle with cancer. Joseph was born on January 4th, 1956, to Teresa Florence... View Obituary & Service Information

The family of Joseph F. Toland Jr created this Life Tributes page to make it easy to share your memories.

Send flowers to the Toland family.