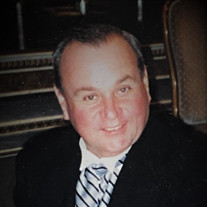 John C. Murawski, Sr. Passed away peacefully on December 23, 2021 at the Thomas Jefferson Hospital with his family by his side. Born on October 25, 1949 to the late Frank “Babe” and Hannah (nee: Baskil) Murawski and has been a life long resident of South Philadelphia. A recent retiree of PECO where he began his career as a janitor and worked diligently to put himself through electrical school. His hard work and admirable leadership style saw him through 48 years of working with men who revered him as their Forman. He loved spending summers in North Wildwood with his wife and family. John was also very involved with the Edward O’Malley Youth Organization. He served as EOM’s Corresponding Secretary and was always there to lend a hand in fixing things, running the concession stands and coaching the youth of our community. John’s love for his family was so evident in all he did; the glow of his face when his children and grandchildren would visit showed his love and pride for each of them. John will be remembered as a loving, caring, devoted family man and gentleman who deeply loved his wife, children, and grandchildren. Beloved husband of 52 years and best friend of Lillie (nee: Simpson). Loving father to Jeanine (Michael) McGuire, Dawn (Kenny) Bergmann and John (Nancy) Murawski Jr. Dearest Pop Rock of Kenny, Kayla, Michael, Dean, Nathan, Macie, Nolan, Madelyn and Sadie Mae. Brother of Elizabeth “Sis” Panikowski, James Murawski, Thomas Murawski, Joseph (Dolores) Murawski, Leon Murawski and the late Frank (Barbara) Murawski. Beloved brother-in-law of Charles (Loretta) Simpson, Maryann (Mauricio) Arias, Donna (Thomas) Johnson, Karen (late Joseph) Black, Kenny Simpson and the late Joanie Simpson. He will be greatly missed by so many nieces, nephews, cousin and good friends. Relatives, friends and members of EOM are invited to his visitation Tuesday Eve from 7-9pm and again on Wednesday morning from 8-9:45am at the Murphy Ruffenach Brian W Donnelly Funeral Home, 3rd & Wolf Sts. His Funeral Mass will begin 10:30am at St. Philip Neri Church, 218 Queen St. Phila. Burial will follow in Holy Cross Cemetery. Donations in his name can be made to the EOM Athletic Assoc., 138 Moore St. Phila., PA 19148 and also in his memory “Be nice” & “Have a Wet”.

The family of John C Murawski Sr created this Life Tributes page to make it easy to share your memories.

Send flowers to the Murawski family.