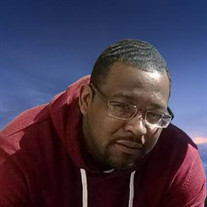 Jermaine Andrew Patterson was born to his parents Margo and James Patterson on September 13, 1984 in Philadelphia Pennsylvania. Jermaine was the youngest of three children. His life ended suddenly on July 1, 2020, in Upper Darby, Pennsylvania. Jermaine was raised with his family in Upper Darby, Pennsylvania, and received his formal education within the Delaware County School District. As an adult Jermaine held various jobs most recently being employed as a general worker at the county hospital. To know Jermaine was to know that he was talented with an awesome personality, even as a kid he was a happy individual, always laughing and telling jokes. As a teenager Jermaine's interest turned to music, rapping and playing basketball, He was a talented ball player earning trophies for various competitions. Jermaine had a knack for making people laugh, he told the most amazing captivating true stories that had all his listeners hanging on to his every word. He had the most contagious laugh and if you were around him, you were definitely going to have a good time. You could always count on Jermaine to be the life of the party. And if you had the privilege of hanging out with him you have a story to tell. Jermaine was a family man indeed; he enjoyed spending time with his family and was always the happiest when he was in their presence. It was always going to be a good time with family if Jermaine was around, as he has an exceptionally close bond with his children and nieces and nephew. Jermaine was preceded in death by his mother Margo, and paternal grandparents James and Rosetta. Jermaine leaves to cherish his memories his two daughters, Victoria and Riely. One Son, Jeremiah. His father James (Dorothy). One brother Ernest and one sister Tracey (Scott). His maternal grandmother Catherine. Two Nieces, Emani and Jasmine and one nephew, Emanualle. As well as a host of aunts, uncles and cousins and friends.

Jermaine Andrew Patterson was born to his parents Margo and James Patterson on September 13, 1984 in Philadelphia Pennsylvania. Jermaine was the youngest of three children. His life ended suddenly on July 1, 2020, in Upper Darby, Pennsylvania.... View Obituary & Service Information

The family of Jermaine A. Patterson created this Life Tributes page to make it easy to share your memories.

Jermaine Andrew Patterson was born to his parents Margo and James...

Send flowers to the Patterson family.