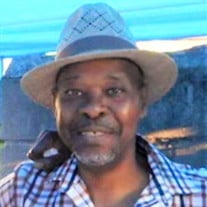 James E. Downing, Sr. (Boot or Uncle Boot) came joyfully into this world on January 22, 1953, in Philadelphia, Pennsylvania. His parents were the late Charles and Marie Downing. On January 26, 2022, James departed this life to join his Heavenly Father. James completed his education in the Philadelphia public school system. After graduation, James worked as a handyman and security guard where he used a broad range of craftmanship and practical skills while carrying out general maintenance and repairs. James enjoyed plumbing, painting, and gardening, and continued to work as a handyman and security guard until his health began declining. James met and married his first wife, Sharon Johnson-Downing, and soon, James and Sharon became the parents of Tywanda Sheline Downing and James Earl Downing, Jr. James adored his family. He touched everybody’s lives and made it a point to make all those he encountered feel important and cherished. He showed up when it mattered, had your back, gave to those in need, and would stand up for his loved ones should the need arise. James married his second wife, the late Evelyn Sanders-Downing, on June 10, 1995. James and Evelyn cared for his three nieces, Veronica, Sabrina, and Maria, when his sister, Francine, fell ill and was incapable. Due to James’ own declining health, he could not physically travel to see family regularly, but his love was ever so evident. He kept everything; his apartment walls stayed decorated with family photos and items given to him throughout the years. James was known for being diligent, organized, conscientious, a perfectionist, and, among all, a ladies’ man. James' life would seem too short to many, but those of us who were blessed to be touched by his understanding know that his existence and the imprint he left on our hearts greatly exceeds the amount of time that he spent on Earth. James’ medical issues regarding his heart began early in his life, which eventually led to him undergoing two open-heart surgeries. During his fight to remain heart healthy, James was diagnosed with Stage 4 prostate cancer in 2012. At this point, James was told by doctors that his heart was not functioning at full capacity and would not be strong enough to undergo chemo. Even with this devasting news, James remained strong. He may have been scared, but you would have never guessed it. He never complained and remained optimistic, as James walked by faith, not by sight. James’ faith led him to outliving all prognoses and diagnoses. As much damage the cancer did to James’ body, his doctors were amazed that he was not in pain. However, for the last two weeks of his life, James was in pain, and that was when the Lord finally came for His child. “If we live, we live for the Lord; and if we die, we die for the Lord. So, whether we live or die, we belong to the Lord.” - Romans 14:8.

James E. Downing, Sr. (Boot or Uncle Boot) came joyfully into this world on January 22, 1953, in Philadelphia, Pennsylvania. His parents were the late Charles and Marie Downing. On January 26, 2022, James departed this life to join his Heavenly... View Obituary & Service Information

The family of James Earl Downing Sr created this Life Tributes page to make it easy to share your memories.

Send flowers to the Downing family.