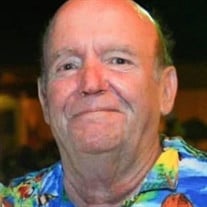 Gerard P. Conroy, Sr, known by family and friends as Jerry, passed away suddenly on February 9, 2022 at his home. Born on May 23, 1950 to the late Patrick and Emma (nee: Bloemker) Conroy, Jerry had been a 66-year resident of South Philadelphia before moving to Delaware County for the last 5 years to be near his children and grandchildren. He was a graduate of Bishop Neumann High School, Class of 1968. After his graduation he enlisted in the United States Navy and served for two tours of duty. The first tour was Vietnam in 1970 and the second was in Desert Storm 1991. Jerry was a proud veteran who was the recipient of both a Purple Heart and Naval Meritorious Service Medal. He served as a corpsman and was affectionately known as “Doc” by his Marine Corps brothers. Jerry was committed to the veteran community and was involved to this day in the Manoa American Legion, Post 667 and as a past commander of the St. Casimir Catholic War Veterans Post 652. He is a retiree of the Philadelphia Navy Yard where he worked lastly as a pipe inspector. Jerry always had a warm smile to greet you and a witty or ornery anecdote to share. He loved to be with family and friends who said he was caring, loving and was so proud of his grandchildren. Jerry loved living on Second Street and was a mummer that loved everything about the Philadelphia New Year’s parade. Beloved husband to the late Helen (nee: Muller). Loving father to Helene (Chris) Conroy-Smith, Gerard (Jill) Conroy Jr. and Christopher (Nicole) Conroy. Dearest Grandpop to Christopher, Gracie, Dani, Jerry III, Ella, Riley and Christopher. Brother of Richard (Marie) Conroy, Margaret Mary (Bud) Fields, Michael (Maggie) Conroy, Bridget (Jack) Varnis, Noelle (Dave) Hill and the late Isabella Conroy-Coulter, Patricia Kurtz and Catherine Conroy-Lord. He is also survived by many brothers and sisters in law, nieces, nephews, cousins and good friends. Relatives and friends are invited to gather Saturday morning, February 19th from 8:30 -10:50am at St. Casimir Church, 324 Wharton Street Phila., PA 19147. His Funeral Mass will be celebrated 11am. Inurnment will follow at New St. Mary Mausoleum, Bellmawr, NJ. In lieu of flowers, donations in his memory can be made to PA Wounded Warriors, Inc. 1117 Country Club Rd. Camphill, PA 17011.

Gerard P. Conroy, Sr, known by family and friends as Jerry, passed away suddenly on February 9, 2022 at his home. Born on May 23, 1950 to the late Patrick and Emma (nee: Bloemker) Conroy, Jerry had been a 66-year resident of South Philadelphia... View Obituary & Service Information

The family of Gerard P. Conroy Sr created this Life Tributes page to make it easy to share your memories.

Send flowers to the Conroy family.