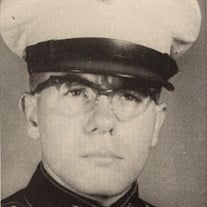 Edward C. Coley peacefully passed away on May 1, 2022 at the University of Pennsylvania Hospital. Born on May 22, 1947 to the late George and Rhoda (nee: Masterson) and Raymond Tyson, Ed has been a local celebrity in Our South Philly neighborhood. Ed was a proud United States Marine Corps Veteran who served several tours of duty. He entered the Vietnam War in August of 1964, engaged the enemy overseas, and finally came home in December of 1971. He served with the 1st BN, 44th ARTY, 2nd BN 94th Arty, NVA Divisions 304th and 325th in places like Khe-Sanh, Lang-Vei, Da Nang in Laos. Upon returning home, he took a job working for Union 56 and AFL-CIO local 195. In 1998 at the age of 50, he participated in the Jump Training at Fort Bragg with the 82nd Airborne Division where he received a Pair of Wings as an Honorary member of the 82nd Airborne. He lived his life in a military-style and was affectionately known as the “Sarge”. Ed had tough ways but a heart of gold when you took the time to truly know him. He loved the bar business and worked in the family bar, Coley's Lounge, where his motto was “No Credit Here”. He also enjoyed his post as the doorman at John J. O’Malley Club and O’Malley NYA Events. He was tough but respected. In his downtime, he enjoyed watching the Philadelphia Eagles, cooking, and baking for family. His family remembers him as loving, caring, dedicated, and stern. Ed loved an argument and was very proficient in starting and ending them. Dearest loving brother of George “Bucky” Coley, Joseph "Mickey” Coley, John “Jack” (Floss) Coley, Rhoda (Frederick “Fritz”) Burke, Leonard Tyson, Joseph (Candy) Tyson, Harry Masterson and the late William Coley, Raymond Tyson, Diane (Harold)Martin and Robert Masterson. Also, he will be sadly missed by his Godsons Fred W. Burke, Edward J. Martin, John W. Burke, many nieces, nephews, cousins, and good friends. Relatives, friends, members of the John J. O’Malley Men’s Club, O’Malley NYA, and the 82nd Airborne are invited to his visitation Tuesday, May 17, 2022, from 9-11am at the Murphy Ruffenach Brian W Donnelly Funeral Home, 3rd & Wolf St. Funeral Home Religious Services 11am. Burial and Military Honors will begin precisely at 1 pm in Washington Crossing National Cemetery, Newtown, PA. Donations in his memory can be made to PA Wounded Warriors, Inc, 1117 Country Club Rd. Camp Hill, PA 17011.

Edward C. Coley peacefully passed away on May 1, 2022 at the University of Pennsylvania Hospital. Born on May 22, 1947 to the late George and Rhoda (nee: Masterson) and Raymond Tyson, Ed has been a local celebrity in Our South Philly neighborhood.... View Obituary & Service Information

The family of Edward Charles Coley created this Life Tributes page to make it easy to share your memories.

Send flowers to the Coley family.