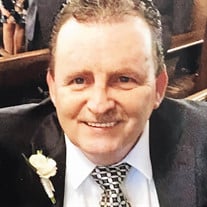 Dennis M. Mulgrew, Sr., suddenly passed away on November 24, 2021 at home. Born on October 25, 1955, to the late Robert and Anna (nee; Bodalski) Mulgrew, Dennis was a lifelong resident of South Philadelphia. A graduate of Bishop Neumann High School, Class of ’73, Dennis worked as a mechanic for the Longshoreman Local 1291. Dennis could fix anything. (Well, he thought he could.) He loved his truck, cars and his tools. He was always prepared. Any day, any time, he would have a bottle of water fastened to his belt loop and a utility knife in his pocket. Dennis was a gifted if understated storyteller, known to bury the lede. He would offer up a crazy story about a wild night in the ‘70s as casually as if he was telling you about the great Shop Rite apple pie he had last week. Dennis loved the Eagles and other Philly sports teams. He also watched every show on the History and Smithsonian channels twice (yes, even the Bigfoot shows). He was just as comfortable listening to The Doors and Led Zeppelin as he was Meatloaf or Whitney Houston. Dennis liked his steak well done, his Marlboros red and his milk whole. Most of all, Dennis loved his family. He was a terrific father and an all-world grandfather. He cherished spending time with his family and would do anything to help them, even when they didn’t ask. And sometimes when they asked him not to. During the last few years of his life, Dennis experienced significant chronic pain. His family will miss him every day, but they take some comfort in the fact he is at peace. Beloved father of Jason (Selena) Mulgrew, Dennis (Margo) Mulgrew, Jr. and Megan Mulgrew. Proud grandpop to Liam, Patrick, Elise, Quinn and Mack. Former husband to Kathleen (Brennan) Callen. Dearest brother of John Mulgrew, Eileen Hughes, Anne-Marie (John Melinchock) Mulgrew, Rosanne (Charles) Owens, Robert (Elizabeth) Mulgrew, Michael Mulgrew, Patrice (James) McKissick, Terrance (Aiko) Mulgrew and Ginny (Gary Lambe) Mulgrew. Nephew to Sr. Maryanne Mulgrew O.S.F., Madeline Bodalski and Margaret “Peggy” Mulgrew. Also, he is survived by many loving nieces, nephews, cousins and good friends. Relatives, friends and member of ILA Local 1291 are invited to his viewing Wednesday morning from 8-10:30am at the Murphy Ruffenach Brian W Donnelly Funeral Home, 3rd & Wolf Sts. Funeral Mass will follow 11am at Our Lady of Mt. Carmel Church, 2317 S. 3rd Street Phila., PA 19148. Burial private. Memorial donations in his memory can be made to the above-mentioned Church.

The family of Dennis M. Mulgrew created this Life Tributes page to make it easy to share your memories.

Send flowers to the Mulgrew family.