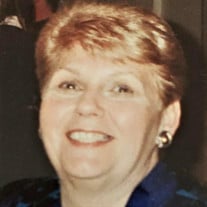 Carol F. Johnson (nee: Smith), peacefully passed away on June 4, 2022 at the Victoria Commons located in Cape, May, New Jersey. Born on January 14, 1946 to the late Charles and Margaret (nee: Mason) Smith and has been a life long resident of South Philadelphia and spent summers at her home in North Wildwood, New Jersey. She was an independent woman who loved to be on the move, especially at night! Giving her the nick name “Nightrider” due to her late-night antics and trips to super markets and Atlantic City Casinos. These excursions always proved to create memorable times with her daughter and grandchildren who for the most part was lucky enough to travel along. With her late husband, Robert “Bob-O” Johnson whom she adored, together they extensively traveled especially to Ireland, a land she loved and often visited. Carol was a generous person who always gave of herself and then some. Even when her son would bring extra groceries after he left, she would check on the neighbors to make sure they never did without. In her free time talking on the phone and shopping with “QVC” accounted for a lot of her day. Carol will be remembered as loving, caring, generous, proud of her Irish Heritage, deeply Religious and devoted to her family especially her grandchildren. Beloved mother of Karl (Johann) Thomas and Carol (Patrick) O’Donnell. Loving and devoted grandmother to Charles “Chas” (Becky) Thomas of California, Kellynn and Brielle O’Donnell and great grandmom of Ellie Thomas. Sister of Charles “Chuck” Smith and the late Robert “Bob” Smith. She is also survived by a brother-in-law, Thomas Johnson; sister-in-law, Marie Kennedy; nieces, nephews, cousins and many dear friends. Relatives and friends are invited to her visitation Thursday eve 7-9pm and again on Friday morning 8-10am at the Murphy Ruffenach Brian W Donnelly Funeral Home, 3rd & Wolf Streets. Her Funeral Mass will be celebrated 10:30am at Our Lady of Mt. Carmel Church. Burial will follow in New Cathedral Cemetery, alongside her beloved late husband Robert. In honoring her giving nature donations in her memory can be made to either The Katie Kirlin Fund, 229 Wolf Streets. Phila., PA 19148 or PA Wounded Warriors, Inc., 1117 Country Club Road Camp Hill, PA 17011.

Carol F. Johnson (nee: Smith), peacefully passed away on June 4, 2022 at the Victoria Commons located in Cape, May, New Jersey. Born on January 14, 1946 to the late Charles and Margaret (nee: Mason) Smith and has been a life long resident of... View Obituary & Service Information

The family of Carol F. Johnson created this Life Tributes page to make it easy to share your memories.

Send flowers to the Johnson family.