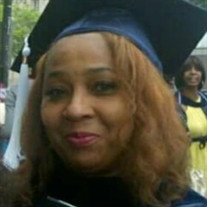 Alice L. Scott-Hunter, Entered into Eternal Rest on September 22, 2020 from the Good Shepherd Hospice. Proud United States Airforce Reservist. Born on November 10, 1958 to the late Harold Scott and Alice Holcomb Scott and has since been a lifelong resident of Philadelphia. Alice was the 3rd of 9 children. She attended St. Carthage School and Parish where she first began her relationship with the Lord. Apparently, along with her sister Robin, she had a short stint as an actress playing a Jewish woman in the play Fiddler on the Roof. Alice entered into motherhood and was married early at the age of 20. Although her marriage didn’t last, she had 3 Rays of Sunshine....Us, who harassed her, and loved her, and brought her joy along with an occasional pain in her backside. Later in life, she delayed college for herself but dove head first into making sure that her Rays of Sunshine had a great education. She tried her best to keep them out of the public-school system. She sent her children to St. Carthage. When a catholic school education became too daunting for her as a single mother, she found an excellent military boarding school up in the mountains to complete their education away from the harshness of the inner city. After ushering 2 of her 3 Rays of Sunshine through college, Alice went back to school while holding a job and earned an Associate's Degree in English. After earning her degree Alice went on to publish a story in the West Side Weekly documenting her story and her struggles to encourage single parents to never give up on their dreams. When it came to being friends, Alice was true blue. She was a loving mother but she was also a great friend to her children as well as to others. When her 1st child went off to college, she would call her every day and remind her, “It’s me, Mom your best friend.” She lent an ear to friends in need. (And money as well, we have the ledgers to prove it) She is known for being free-hearted & a keeper of her word. Alice was a favorite on her block of Ellsworth St. She literally lit up the block, leaving her Christmas lights up to spread joy year-round. She graciously decorated her front porch with odd pieces of furniture and books to add ambiance to her street. And she would lovingly shout kind words like F**k The Neighbors. They will miss her so. She was a current employee of the Internal Revenue Service where she worked as a tax examiner technician bankruptcy assistant. Alice was a strong independent Catholic woman who lived a good life. Never turning her back on anyone in need Alice was a person you could depend on. She enjoyed reading novels, taking long walks (usually to center city), watching love stories or unsolved mystery shows, she was sweet, she was funny, she was also a poet (don’t you know it?) she was a piece of work and would let you know when you were wrong but she still loved you anyway, but most of all she loved her family. Alice donated to soo many charities. Wounded warriors, Operation Smile, Philadelphia Opera, Americorps, St. Jude's, Feed the Homeless, various homeless shelters, and soo many others. This list is ridiculously long. She totally must have gotten put on a list and all of the organizations hit her up good, but she donated to them all. Wow, she was amazing. Loving mother of Quiana (Tony Mangum) Hunter, Kenya Hunter and Darryl (Ethel) Hunter. Proud grandmother of Jordan, Manna, Kaidan, Isaiah, Nolen, Nelon, Anthony Jr., Alianna. Sister of David Scott, Tara Alston, Robin Scott, Bridget Scott, Ramona Johnson, Patricia Scott Cherry, Eric Scott and Tawny Davis. Also, she will be missed by a host of nieces, nephews and cousins. Relatives and friends are invited to her visitation Thursday, October 1, 2020 from 9am at St Cyprian Church, 525 S. Cobbs Creek Parkway Phila., PA 19143. Funeral Mass 10am. Burial will follow. Donations in her memory can be made to PA Wounded Warriors Inc. (117 Country Club Rd. Camp Hill, PA 17011.

Alice L. Scott-Hunter, Entered into Eternal Rest on September 22, 2020 from the Good Shepherd Hospice. Proud United States Airforce Reservist. Born on November 10, 1958 to the late Harold Scott and Alice Holcomb Scott and has since been a lifelong... View Obituary & Service Information

The family of Alice L. Scott-Hunter created this Life Tributes page to make it easy to share your memories.

Send flowers to the Scott-Hunter family.